Good luck, Joe Biden. Good luck, Kamala Harris. Tears streamed down my face when Lady Gaga sang the national anthem. After the shocking invasion of two weeks ago, instigated by a thug with no self-control and no idea of history, the sight and sound was inspiring. This is not going to be easy but it is going to be worthwhile.

Posted by Priscilla at 10:07 AM No comments:

The United States is only a couple of days away from inaugurating Joe Biden and dumping Trump. What that  means or how that will happen is entirely conjecture. Apparently Mar A Lago has a signed contract from Trump that promises that he won't live there full time and there are plenty of people in Palm Beach who don't want him. That doesn't mean that Trump won't live there full time. Most of my lawyer friends tell me that everything is legal unless someone files a lawsuit so the fact that Trump initially promised not to live there has never been challenged in court.

The damage is already done however. Despite everything about making America great, Trump destroyed Americans' faith in normal institutions. Trump deliberately belittled longstanding news outlets while extolling the virtues of unregulated and unexamined news sources. The country that is left after Trump is not in any way the same country from 2016. Even mail delivery has been destroyed by Trump deliberately.

As an Army brat, my parents always warned us about being "ugly Americans". But now we have monstrous morons like Mike Pompeo who epitomize that notion. Keep in mind that Pompeo was the #1 graduate of West Point in his graduating year, got a free ride for college, but resigned his commission as quickly as he could after his obligation. That means he spent 5 years in the military and now thinks he is a master of the universe. He wants to be President. Please don't let that happen.

Posted by Priscilla at 2:56 PM No comments:

Today is Twelfth Night. Just as in the middle ages, the Lord of Misrule took control. Today Donald Trump incited a riot at the US Capitol. That is not an exaggeration, not hyperbole.

From Politico--President Donald Trump urged his supporters ahead of the proceedings earlier Wednesday to head to the Capitol.

"We're going to walk down to the Capitol. And we're going to cheer on our brave senators and congressmen and women, and we're probably not going to be cheering so much for some of them," Trump said at a rally outside of the White House.

"Because you'll never take back our country with weakness," he added.

What is accomplished by any of this behavior? This is outrageous and unacceptable.

Here are the possible charges. Let us all hope that each person receives the appropriate measure:

While reading the two comments on my last post, I wondered why people are so hell-bent on destroying American democracy. Make no mistake, that's what it means when all audits and recounts and certifications to date show that the numbers for the 11/3 election are factual, but people are still focused on throwing out the votes of entire states. My quandary is that I cannot understand how anyone, let alone so many people, are willing to completely destroy the ideal of the US for...Donald Trump.

The United States fought a civil war that was horrific in many ways but the purpose of the war was at least substantive and that was true whether you were blue or gray. All of the high moral purpose of the anti-slavery crowd versus the states' rights cohort who may have been defending an indefensible idea at its core but were still fighting for an idea that was central to how the US was designed and ordered which was the independence of each state to make decisions. But now we will apparently be killing neighbors and relatives for Donald Trump. Given that I wouldn't cross the street to shake his hand my perplexity is understandable but what about the people who support Trump? Does Trump mean so much to you that you would kill your brother?

Posted by Priscilla at 2:59 PM No comments:

Once again I ask, "What does it take for Trump's supporters to condemn him?"

Yesterday, in a taped and transcripted phone call (so there is contemporaneous evidence), Trump asked the Georgia Secretary of State to cheat in order to overturn the election results in Georgia. There isn't any evidence that Raffensperger will do anything, but he does not have to for a crime to have occurred. This was not a joke, not sarcasm. Trump broke Georgia state law and US federal law. Will that be enough?

The simple answer is that Trumpettes don't care. They don't care that their chosen one is a liar, a thief, a criminal. That says a great deal about what it takes to be a Trumpette. A pox on all their houses.

Christmas decorating is always a production at our house and it doesn't matter where that house is. I don't go quite as crazy as I used to when I gave the swim team parties, but it's that time period when I amassed most of my Christmas stuff. But in this time of virus, we certainly aren't planning to host any gatherings even though we do still decorate for Christmas.

One of my earliest home made decorations is one we still have and use. Family Circle magazine and Woman's Day magazine used to exist and they used to have all manner of tips and ideas. I learned to knit and quilt from those two magazines but I also made this angel from a pattern that had to be from about 1973 or 1974 because my middle son was tiny back then. 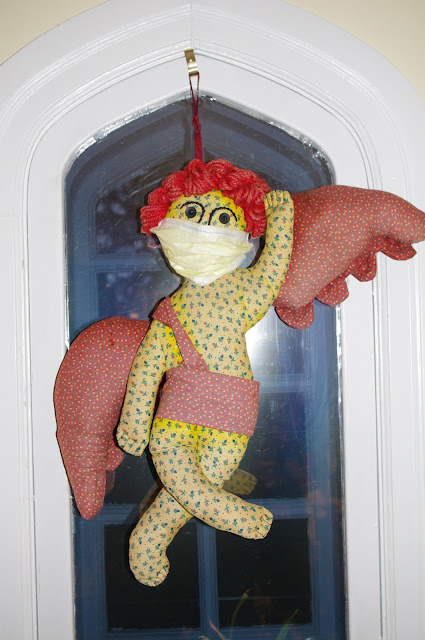 The angel has faded dramatically over the years with the calicos becoming more and more fragile, but now we hang it inside rather than out so the sunlight is less direct. Plus that window has film to control UV light on it, one reason it looks a little strange when photographed. We chose to use film on the windows rather than any kind of curtain because they are oddly shaped and, though you can't tell from this photo, there are three in a close row so any curtain would obscure the nice window shape.

The other Christmas themed old friend is my Sawtooth Cat variation. It is still Sawtooth cats but, as I wrote previously, almost 100% of the fabrics in the quilt are Christmas themed. Even the nice sort of cocoa brown background is actually very small stars rather than checks or just plain. I liked that fabric so much that I got some in yellow, some in navy, and this one in brown. It's definitely not the best quality fabric in the world but most of my quilts never see the light of day so fading is less of an issue. Even where it hangs today for Christmas, only has one window, a small leaded and stained glass example, and doesn't even have lights on most of the time. It is in the space on the ground level of this old stable that used to be where the big doors that admitted the carriages were.

I don't know how long this building was a real working stable since it was built in 1901. Even if the original owner no longer kept carriages, he may have kept horses for riding or polo since this is that sort of community. The conversion to a house happened in 1979 so there were decades where it was still configured as a stable but what it was in fact remains a mystery. 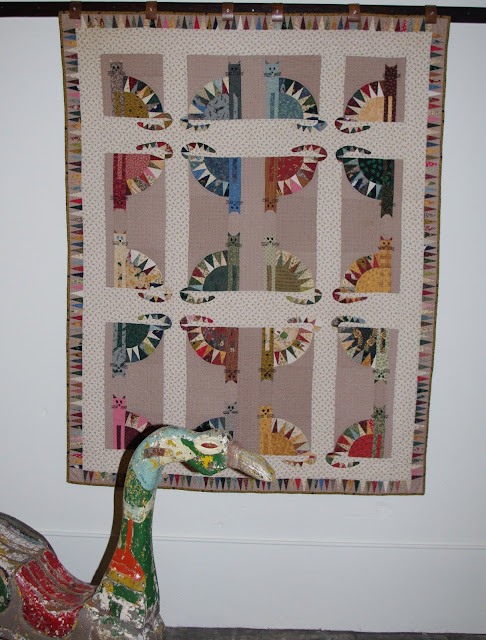 In the foreground is my Christmas goose carousel animal. While I don't think it was supposed to be for Yuletide, the remaining paint is mostly red and green.

'Justin Levitt, a Loyola Law School professor who specializes in election law, called the Trump lawsuits dangerous."It is a sideshow, but it’s a harmful sideshow,” Levitt said. “It’s a toxic sideshow. The continuing baseless, evidence-free claims of alternative facts are actually having an effect on a substantial number of Americans. They are creating the conditions for elections not to work in the future.”

The entire democratic process is being stalled by crazy men and women who apparently have no regard for electoral systems. Two voters in Pennsylvania sued to delete nearly 7 million votes in Pennsylvania because they said the county they live in did not treat them the same as all other PA voters. It is small wonder that the judge was astonished by their complaint. That wasn't even the craziest suit nor was it the craziest suggestion. Sidney Powell said that a late South American leader was responsible for engineering permutations and algorithms that changed votes in electronic voting systems. Rudy Giuliani had something running down the sides of his face, many people charitably said that it was hair dye.

I can't think of any water soluble hair dyes--not that I have any vast personal experience. Laughing at the messengers is usually not a sign that their message is serious. Even Tucker Carlson made fun of Sidney Powell though he was roundly excoriated for it.

At the same time, Trump was supposed to participate in a video conference of the G20. He lasted 13 minutes before he started tweet ranting and then went to play golf, again. Simultaneously  nearly 200,000 Americans were diagnosed with Covid19, while Trump was playing. Does that image supplant Nero fiddling?

Posted by Priscilla at 8:40 AM No comments:

Priscilla
Known primarily as an applique quilter, I have started to make more pieced quilts recently or mixed genre quilts. If I am not foundation piecing I am probably sewing by hand. Sewing and quilting are meditative for me with the process being more important than the product. Most of my quilts are hidden from view on the princess and the pea bed, piled one on top of the other as I finish them. Occasionally I change out the display on the wall but it only holds one at a time.